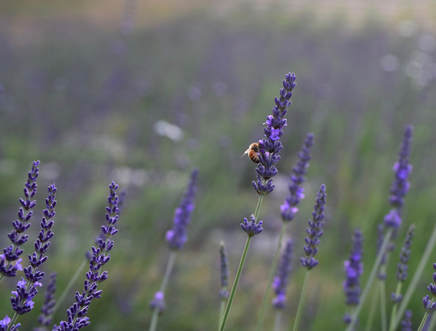 ​Gros Bleu is a dark blue (almost navy) colored lavandin with a clean, lavender scent.  It makes a beautiful fresh bouquet a rather “flowy” look, and makes a beautiful wreath (though the buds do tend to shed easily, so don’t put it on a door) It also makes a beautiful dried bouquet since it holds its color really well,  and is great for sachets. It also yields a very lovely essential oil. Gros Bleu is a larger plant (36-40 inches across) with nice long stems (20-24 inches) and needs adequate spacing to allow for air flow between the plants.  It blooms in early-mid summer, with an additional small late summer/early fall bloom if you're lucky.
​ 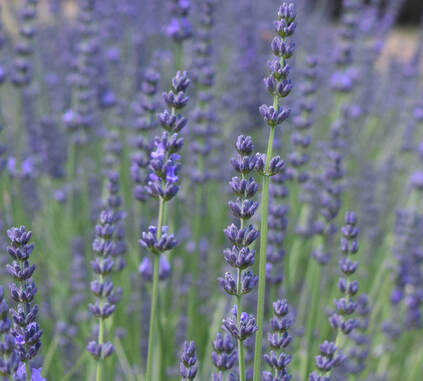 ​Impress Purple was originally a French field variety.  It was imported into New Zealand and renamed ‘Impress Purple’ by Peter Smale in 1994.  It makes a beautiful cut flower because its stems are long, strong, and straight, and the rich purple buds have a bit of stripiness to them that gives them a silvery look.  The buds also stay on the stem well.  The spikes are long and the whorls are compact.  The dried buds are also good for sachets
The color is a medium purple, somewhere between the dark purple of gros bleu and the medium purple of grosso.  I have it sandwiched between those two varieties in my field so that my field gets slightly lighter the further out your go.  Impress Purple, like other intermedias, blooms early to mid summer.  It's a large plant, one of the largest, and forms a nice mound of grey-green foliage so that it looks nice even when it isn’t in bloom.
​ 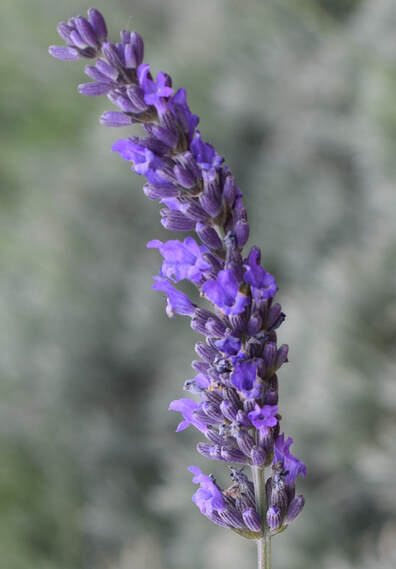 Grosso is a workhorse.  It is a vigorous lavender with grey/green foliage, nice long stems, and medium purple blooms, which arrive in abundance from early to mid summer.   Grosso was discovered in France in 1972 and is a very popular choice for commercial growers due to its high oil yield and wonderful scent. In fact, most of the lavender oil produced in the world comes from Grosso.
It is the main lavender we use for oil distillation because it smells so good and produces more oil than other varieties.   In addition to oil, its stems make beautiful fresh or dried bouquets and its buds are great for sachets.

Angustifolia lavender is considered a "true" lavender as it isn't a hybrid.  It is valued for its culinary uses, having a sweeter taste and smell than the lavadins.  But it is also highly valued for its oil and buds for sachets. In general, this lavender is a slower grower than the hybrids and a smaller plant.
​ 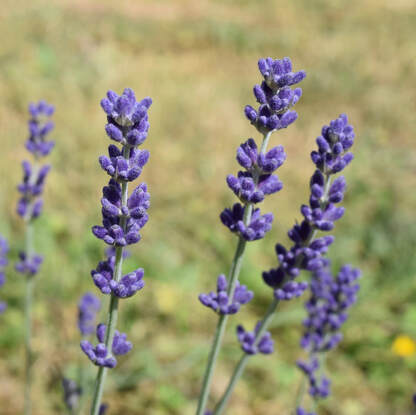 Royal Velvet is a bit of an overachiever.  It is a wonderful culinary lavender (with an almost citric-y taste to it), it makes a beautiful fresh or dried bouquet, its oil is lovely.  It does everything well.  And it was discovered right here in Oregon at the Van Hevelingen Herb Nursery just a few miles from our farm in the 1980s.  This lavender has a compact growth habit with grey-green foliage. It is a bit of a late bloomer, but it’s worth the wait. Its buds look like dark purple velvet (thus the name) and the purple flowers offer a beautiful contrast and make a beautiful fresh bouquet. The color is just breathtaking. The buds stay on the stem and hold their dark color so they are great for dried bouquets and wreaths.  It blooms in late spring and again in late summer if pruned.
​ 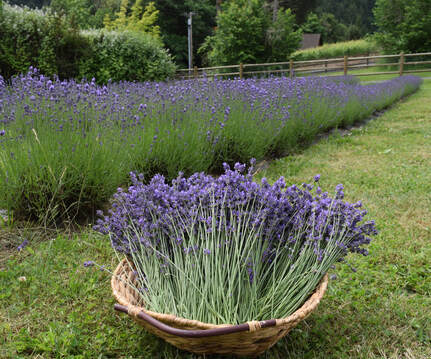 French Fields is a beautiful light purple lavender and is my first bloomer every year.  I had one plant up by our house and I liked it so much that I took some cuttings and propagated 60 plants to put out in the field.  The shrub is compact, green and nicely mounded.  The whorls are spaced evenly and spread out.  This lavender will also bloom pretty continuously throughout the summer after it is cut back. This is one of the lavenders I use for culinary, but it also makes a nice wreath and a sweet bouquet. 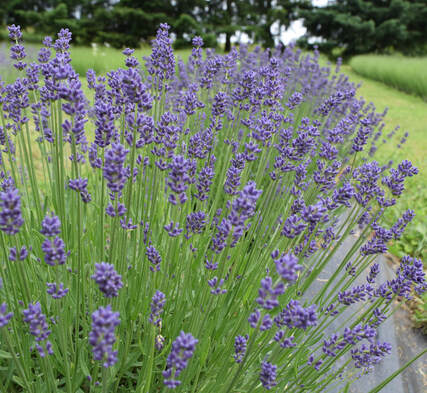 I love this lavender for several reasons. My wonderful mother's name was Felice and when I heard that there was a lavender of that name, of course I had to have it.  It wasn't easy though.  It originates from the Netherlands and is grown in England and a few other countries in Europe.  And it is just recently becoming available in the United States.  Thankfully, the good folks at Van Hevelingen's nursery in Newburg had a few plants and were trying to propagate from cuttings, which they said they would share with me if the plants took.  They must have gotten tired of my emails, checking up on the progress, but thankfully, some of the plants did take and I got 5 plants from Melissa Van Hevelingen the next Spring.  The following Spring, I got 60 more and then I started propagating on my own and added 50 more to the field.

​Felice is a very enthusiastic lavender, blooming continually and cheerfully throughout the summer -- which is so very fitting for a lavender with my sweet, cheerful, energetic and enthusiastic mom’s name. 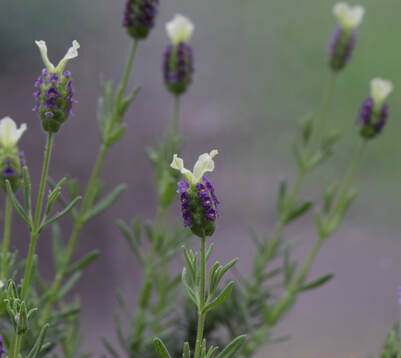 Spanish lavender (Lavandula stoechas) is an early blooming lavender that grows well in containers and in the garden.  These lavenders add a nice pop of color in the spring and attract beneficial insects and pollinators to your garden. Their distinct “bunny ears” at the top of each bloom set them apart from other lavenders. However, they do like full sun and are drought tolerant, just like other lavenders. This is a very hardy lavender that propagates readily in some parts of the world -- sometimes to the point of becoming invasive.  In fact, in Australia they're considered an invasive species and a weed. (How dare they!)
Spanish lavenders are not as well known for their fragrance as the English lavenders.  But the blooms can be dried and used for potpourri. They also make nice table centerpieces and nice gifts.  The variety above is called "Pretty Polly" and is one of my very favorite Spanish lavenders.